There are four types of calendars:

You may think that four seasons a year has been standard in European cultures, but the old Norse calendar had only two: summer began in mid-October, and winter in mid-April. The “Wheel of the Year” is a common calendar used by modern-day pagans of European ancestry and is based on the equinoxes and solstices, and the half-way moments between them to mark changes of a four-season calendar. The images below are of Heathen (modern-day Germanic and Norse pagan) and Celtic pagan calendars. If you are in the Southern hemisphere and wish to honour this calendar, Glenys of Pagaian Cosmology translates it so your celebrations are seasonally appropriate.

There are many ways of acknowledging seasons and cycles because of the diversity of environments, traditions and beliefs that influence a culture. The term “pagan” may make you think of someone in pre-Christian Europe who worships multiple gods, but it actually refers to people who are “fixed or fastened” to the land, i.e. villagers and country folk. In other words, pagans are people who have not yet experienced cultural genocide and disconnection from their ancestral homelands and whose culture is indigenous to, or rooted in, a specific environment and place. Aboriginal Australians offer us a reminder of how all humans once lived “fastened” in sacred connection with our environments:

Exercise: Wherever you live, consider how to describe a seasonal calendar in your area. You may want to use the image below adapted from this template as a blank canvas, with this complex blended calendar offering some inspiration. 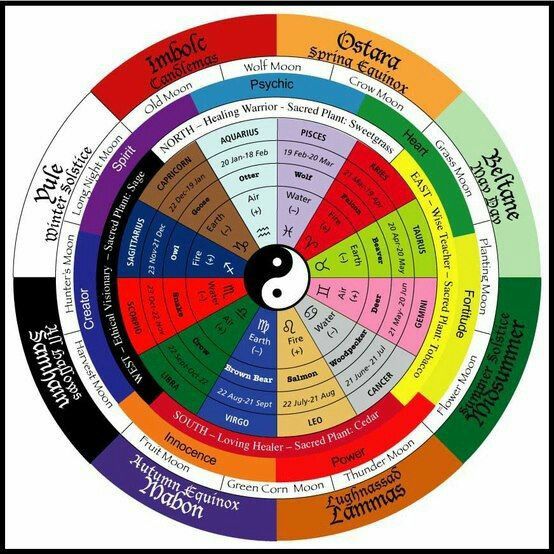 In the template, cross-quarter days are marked as circles and lines mark equinoxes and solstices. Aspects of your Medicine Wheel may be written in the upper open area, land-based cycles in the next layer, and important dates below the months. Don’t worry if you don’t know some things. You can’t do this wrong; you have a unique ancestry (of land(s), lineage(s) and spirit) and the way you celebrate seasons, solar and/or lunar cycles can be your own.

To give you some examples, in my Medicine Wheel / adapted Wheel of the Year calendar, each of the four parts is associated with a season, a colour, an Earthly cycle, an aspect of ancestry, and a totemic plant or animal – so my direction of north represents the mental, the element of air, the season of winter, the colour black, the Earthly cycle of rebirth, my Sumerian (Jewish) blood lineage, and the date palm (a sacred plant). Transposed over the Wheel of the Year, I am developing an understanding of the land-based seasonal calendar for Yuin country on the south-eastern coast of Australia, where for example, humpback and southern right whales migrate north to breed in May, and then back south with their babies in October. Also transposed are a few holy-days I like to honour with others around the world include Earth Day, the International Day of Peace, Indigenous People’s Day, and Martin Luther King Jr.’s and Nelson Mandela’s birthdays. I also honour birthdays and death days, as well as new and full moons and eclipses.