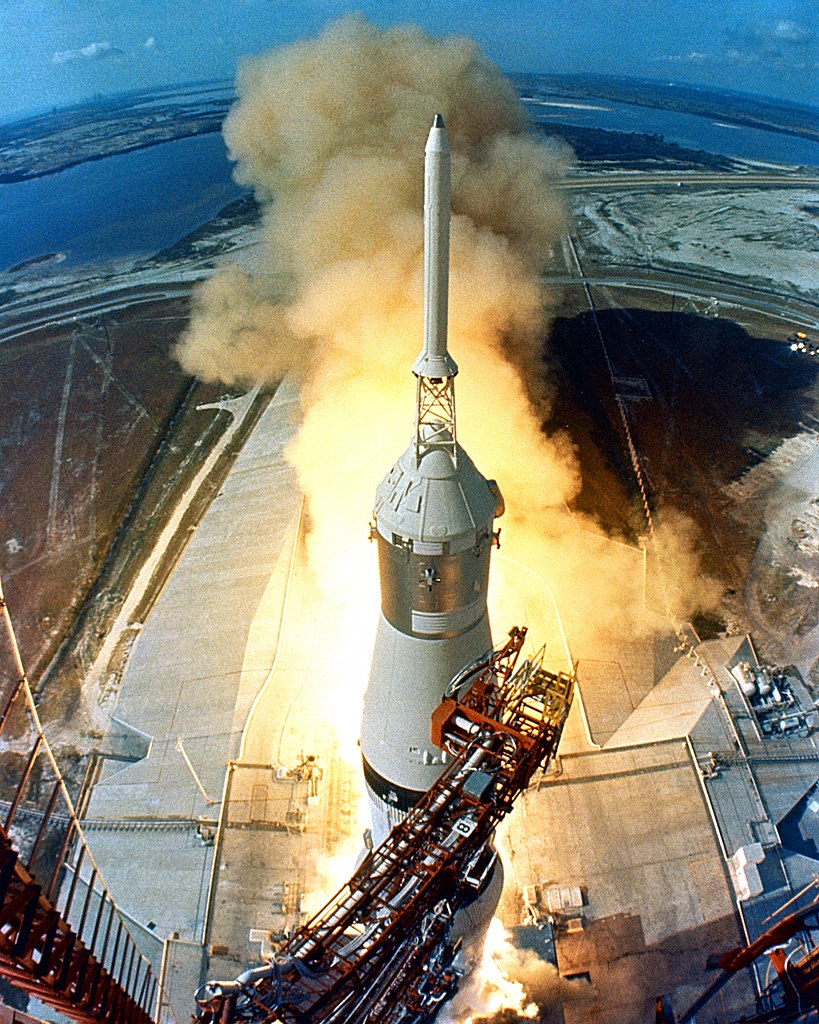 Valerie recently asked me why space exploration so captivated me as a child and still evokes strong emotion for me today. I’ve realised it’s got something to do with the safety of collective achievement.

Through the eyes of a child, perhaps nothing feels safer and more secure than seeing adults working together in determined harmony and solidarity towards a shared vision. As a child of the 1980s and 90s, few had the grandeur of space exploration. And so it is with deep ambivalence that I experience the individualistic efforts today of Elon Musk and Jeff Bezos, even though I am still brought to tears by ham Hollywood depictions of golden era Space Race events like Apollo 11 and 13. (Image of Apollo 11 from Wikipedia)

There are easy critiques about the merits of investing massive resources in space exploration, such as the need to focus more on addressing climate change, poverty and disease. There are strong counter arguments, such as that solving complex challenges related to space exploration leads to technologies that can be used for overall good, as well as strengthening our collective problem-solving ability. That’s where the refrain to “moonshot it” comes from – that when we put so many resources into something it’s collective by its nature. Lately I’ve been thinking about differences in space exploration during the Apollo age and now, and what this says about our society. For me, Bezos’s and other company’s efforts highlight a disillusionment with and disconnection from collectivist and communal dreaming.

As a former space nerd,

I chuckle at the impotence of today’s individualistic and self-aggrandising efforts. For example, all of the Mercury Program’s flights in the early 1960s travelled higher than Bezos did, and in terms of payload capacity, no recent effort has yet bested the Saturn V rocket that carried the Apollo program astronauts to the moon. Led mainly by Space-X, the commercial payload industry has grown immensely over the last decade, but none of its achievements come close to the complexity and technical difficulty of the Hubble Space Telescope missions of the Space Shuttle from over 20 years ago. This is especially ironic since the Space Shuttle was a fairly weak technological achievement meant to be a “proof of concept” of a reusable space vehicle. (Image of Hubble from Wikipedia)

It can be quite plausibly argued that the last true great leap forward in space technology was the space station SkyLab and related Soviet efforts, with their budgets waning ever since. Author of 2001: A Space Odyssey Arthur C. Clarke’s vision of space travel in the year 2001 now seems so off the mark, but considering the pace of achievements at the time of the Apollo program, they were not that far-fetched. He failed to account for the political reality that having effectively ‘won’ the Space Race, the U.S. appetite for massive collective investment in Space Exploration would drop off so considerably. 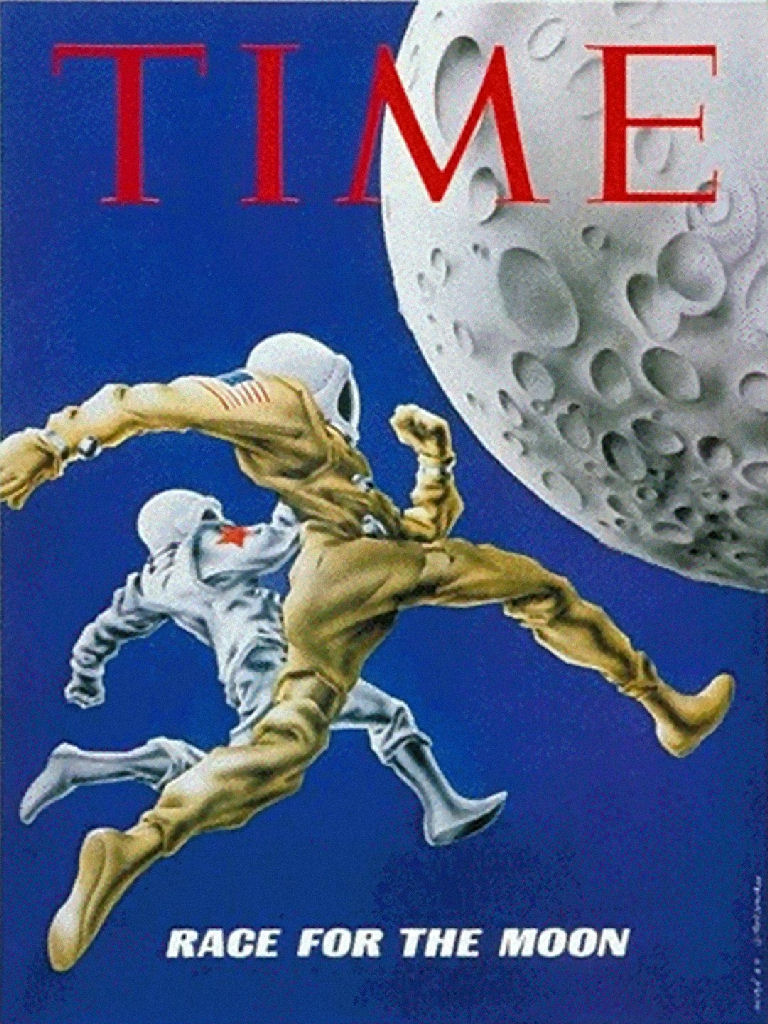 Of course the collective achievements of this era have a massive dark side. The Space Race was just another front in the Cold War. The bedrock of the technology and indeed the scientists who advanced it were from the German rocket program of the Second World War. (If this is new to you, check out Operation Paperclip, the Allied Mission to secretly bring German rocket scientists to America.) I think it is fair to say that the U.S. of the 50s and 60s was not much more collectivist than it is now, but one thing people did know how to do was come together to fight a war. The American “war machine” of WWII is in my opinion one of the most spectacular achievements in the history of industrialised civilisation – just consider the material prosperity of the years since that was built on it. Capitalism was critical, but without the consent, taxes and labour of the people working in a war socialist footing, it could never have happened. This is true of the Space Race as well. (Image from here)

So in no way am I saying the achievements of the likes of Apollo were halcyonic. It was part of a war. The capitalist military industrial complex was supercharged. But on some level it was so massive an effort as to not be possible without some form of communal dreaming. This is what feels important to me.

Today Bezos wants us to be impressed with his relatively meagre achievements precisely because he has done it without communal dreaming, though he thanked all Amazon customers for funding his personal vision. Materialist, consumerist individualism put Bezos into space, and he wants us to be wowed and entranced by the power of putting massive amounts of power and resources in the hands of a few. He doesn’t want us to worry about communal dreaming, just keep to following our individualist dreams where we fill our lives with goods and services and very few of us may go on to join him amongst the pantheon of the super-elite. (Image from here)

There are a number of challenges today waiting for us to approach them communally. I predict that when things get bad enough, the power of collective dreaming will become clearer and more appealing to us. But it is sad if only desperation and an existential war footing can prompt us to recognise what I consider a truth: there is inherent value in collective and communal dreaming, for our internal and external worlds.

The odds of any one individual getting the Corona virus are so far quite low, and the probability of severe symptoms or death even lower. Making individual decisions based on this low probability is therefore, on some level, the rational thing to do. But on a long enough time scale — which in this case could be a matter of weeks — self-interested rationality becomes catastrophic. For some it may be physical, and for others psychological, emotional, and spiritual.

I will analyse this phenomenon from three frameworks of Western thinking starting with the Prisoner’s Dilemma. It goes like this: two prisoners are being interrogated. They have only two choices, rat on their mate or keep silent:

If one’s individual goal is to avoid as much jail as possible, the most “rational” self-interested thing to do is to rat, because if you are acting in a self-interested fashion, so too might be the other prisoner. If you rat, you have a chance at going free, and your worst case scenario is only two years. Cooperating is a good option for the individual but is irrational because it cannot be relied upon and comes with the greatest personal cost. But this thinking falls down if one has confidence in the collective values of the other. The IRA were famous for fanatical silence under interrogation, such was each member’s commitment to the collective cause. For our prisoners, the cause could be a desire to collectively serve less time. Applied to our toilet paper example, it means that the decision to hoard toilet paper is like ratting on your accomplice. If you can’t rely on the other’s collective values, or even their spirit of selfish cooperation, it is best to join the hoarders. Best case scenario, you are fully stocked for months; worst case scenario, you will have a decent amount. Under no circumstances will you be left with none. (Image from here.) 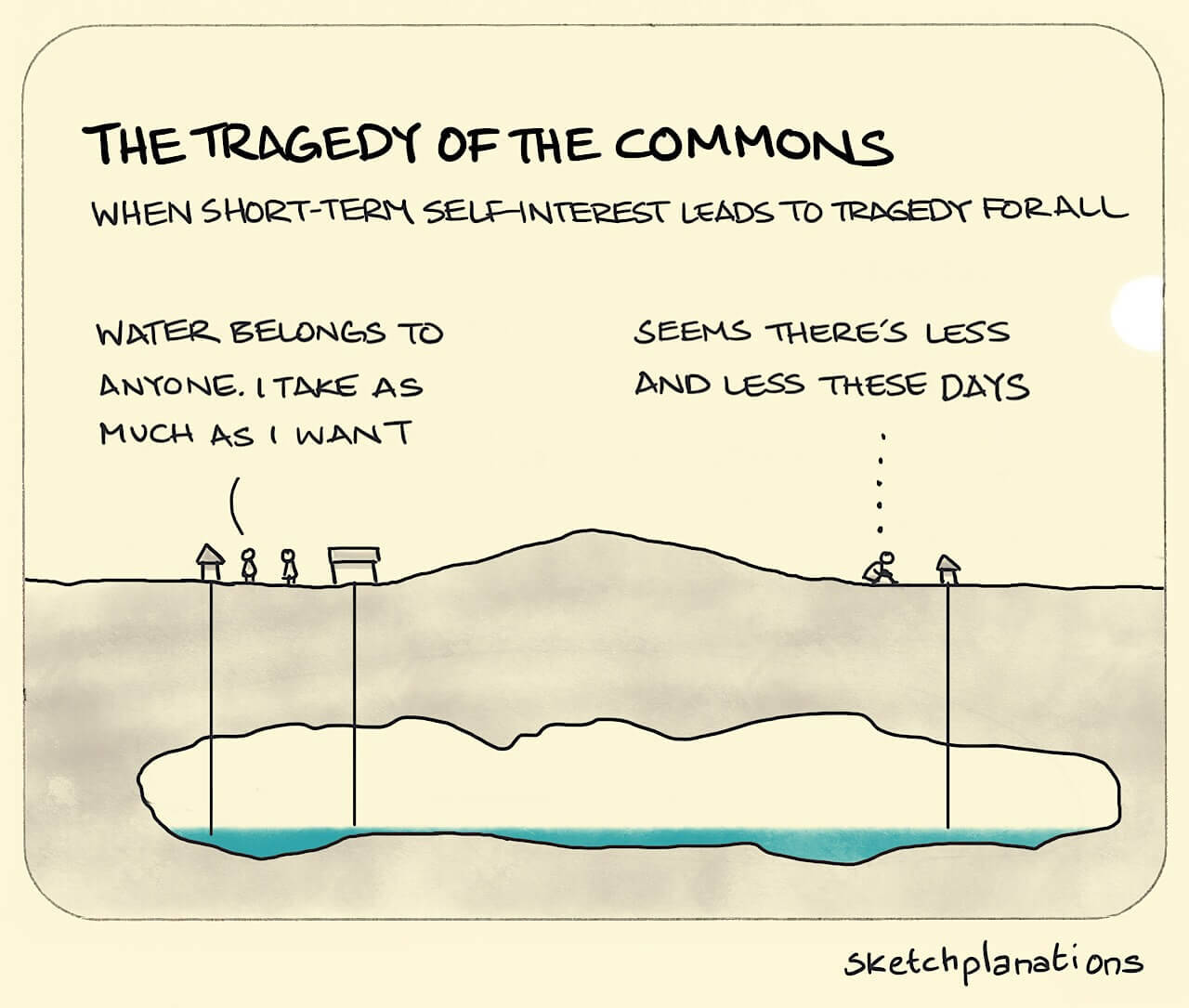 Another famous idea is the “Tragedy of the Commons”, an 1833 essay now part of the Western cultural lexicon. This is the idea that a common resource, for example grazing land, can easily become depleted or destroyed by individuals acting in their own self interest, i.e. grazing their own herd without regard to the long term effects on the land. This was in fact an argument — a terrible one if you ask me — for the morality of the enclosure movement, which was the creation of legal property rights over what was previously common land in the Britain, the idea being that an individual owning land will take better care of it, because it will be within both their interest and power to do so. This could mean that rather than our being trusted to collectively or cooperatively manage the supply of toilet paper, an authority needs to “own” the supply. This is perhaps like supermarkets ‘taking ownership’ of the situation and setting limits on TP purchases. (Image from here.)

A third framework of interest, and perhaps most relevant to our toilet paper dilemma, is the idea of Commonize Costs — Privatize gains. Also called “Moral Hazard” during the Global Financial Crises, it is an individual maximising their self-interest by being selfish with any benefits derived from their interaction with a common resource and offloading any negative consequences to the collective. In the toilet paper case this is people hoarding a personal stash and leaving the consequences and chaos to others to deal with. They got in early and those who didn’t can be damned. If this behavioural trait is common in a group, those with the most community-minded instincts or values in relative terms lose out (i.e. those who didn’t buy extra TP because to ‘do the right thing’ and now have none). (Image from here.)

Looking at these articles on Wikipedia, it struck me how much that I think ought be deeply ingrained wisdom and self-evident knowledge has been studied intellectually and quantified as ‘evidence’. This is borne out by people acting like they need this kind authoritative guidance and advice before believing something is true. For example, the Tragedy of the Commons article mentions a study finding clear evidence that the culture of the people had something to do with how people treated common land! It is truly shocking to me that this needed to be studied. I do not wish to sound totally negative about the usefulness of these ideas. But it is clear to me they are fundamentally limited by ignorance of the worldview and cosmology from which both the behaviours and our attempts to understand them emanate. To me, the sheer complexity of systems at play in all of these circumstances call for indigenous thinking and science. From this vantage point, how to look after a common resources is self-evident, an idea antithetical to the Western scientific mind. (Image from here.)