A few months ago somewhere in the outback around Broken Hill, I experienced a spiritual lightning strike inside. Something in me died, an old dream (maybe it was always a lie), and its energy has been emerging from my body in incredibly itchy rashes across my chest, back, face, and shoulders, and grief-laden tears. Sometimes I know certain things aren’t working but am reluctant to call them out or make a change, sitting in doubt and denial and dumbly hoping they’ll work out without conflict. I started to feel, for the first time in my life, like I could fully exist somewhere, and a community started to gently invite me in. Though it was not practical to join them, I can still see some smiles and hope and hear someone asking me to invite her to my housewarming when I move out there next year. It is possible. I’m sure I don’t know. All I know is the sand is shifting under my feet again, and some people and aspects of life I’ve been counting on are disappearing. I’ve been through this many times, and I know my role is to stay centred, be patient, accept the gifts I’m given, let go of that which is not working, and freefall into the unknown with as much grace as I can.

Though much trauma is being acted out in the world right now that is sometimes referred to as ‘white privilege,’ no one is merely ‘white’, and I cringe when I am referred to as such. We all have cultural heritage with gifts to unpack and celebrate. My modern, multi-cultural self includes a body born of Shawnee land carrying earth ethos teachings from my East Frisian roots as well as teachings about existential destruction from my Ashkenazi Jewish lineage, as well as wisdom from Native American, Anglo-Celtic Australian, Anglo-Saxon American, Irish-American, Hispanic-American, African-American, Asian-American, Peruvian, Indian, South African, Buddhist, Christian, Hindi, Aboriginal, and many other beautiful cultures. I saw a quote a few months ago that really resonated and went something like this:

Life was better before colonisation and mass migration, but now it is more beautiful.

I think there is much truth in that, as well as the inset quote a friend sent me. We each have much to celebrate and reconcile within our individual cultural mix. So on December 24, I finished baking some Stollen, sang Godewind songs in German and Platt, told stories and looked at photos to honour my East Frisian paternal ancestors and country.

To honour my earth ethos, I celebrated a fiery summer solstice in ceremony with loved ones. (Literally, there were, and are, many fires burning this country.) Sitting around a fire pit in the four directions, we embodied some of my heart’s favourite forms of expression: music, meditation, poetry, and art. Part of our ceremony was a poetic prayer in words & drumming to the Thanksgiving Address gifted to us all by the Haudenosaunee, which brings our minds together as one in thanks for: The people, The Earth Mother, The Waters, The Fish and Other Water Creatures, the Plants, The Food Plants, The Medicine Herbs, The Animals and Insects, The Trees, The Birds and Other Air Creatures, The Winds, The Thunder Beings, Grandfather Sun, Grandmother Moon, The Stars, The Wise Teachers, The Creator, and All Others Who Have Not Been Named. (Image from here of the People thanking Grandmother Moon) 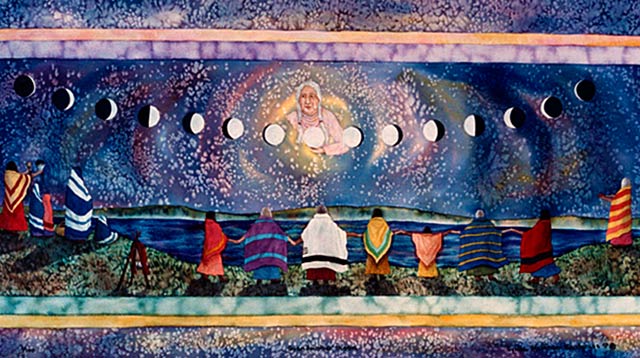 May you enjoy the blessings of the season from Father Sun and Mother Earth whether you have just been through Summer or Winter Solstice.